All the votes are in for the “Make Bugzilla Pretty” contest, and we have a winner!

First off, let me say that every single entry was amazing. Every single person who entered had innovative ideas, and nearly every entry was prettier than our current UI.

There were four candidates who were mentioned in some positive way by almost every voter:

Any of these designers would be a worthwhile addition to any UX team anywhere. Simply the ability to take Bugzilla’s existing UI and turn it into something that nearly everybody finds attractive is an accomplishment that few designers could achieve. In the 13 years of Bugzilla’s history, I’ve never seen it done before these entries. I would be personally happy to write a recommendation for any of the above designers, and they may contact me for that if they wish.

Let’s just say a few words about each of these designs:

There were a ton of positive comments on the usability aspects and organization of Alex Faaborg’s [Bracket] theme, particularly some of the new fields suggested and the brilliant use of color to improve the scanability of the page. It was impressive that everything on the page is basically text or lines, and yet it creates a very readable, clean, simple layout.

We expect future versions of Bugzilla to draw a lot on the usability concepts present in Faaborg’s design, even though it is not the first-place winner.

There were a lot of positive comments on the use of space in Zeeshan Syed’s design. The color contrast really makes things readable, the tab navigation is very clear, and the section titles really stand out.

Voters were almost overwhelmingly positive about Long Duong’s design. Many people mentioned that they liked the clean lines and very “Bugzilla” feel of the bug page, and that the collapsible sections were a great touch while still being visually appealing. There was also a lot of positive feedback about the header design–people really loved its organization and style. Finally, the home page design was just really cool.

Based on the number of votes and the general amount of positive feedback, Duong is our first runner-up for the Make Bugzilla Pretty contest, and it is very likely that we will end up incorporating some of his UI concepts into our final design.

This was a stiff competition, and all of the above designs would have worked great as our new UI. However, the winner of the “Make Bugzilla Pretty” contest, and indeed the recipient of the majority of votes, is Jonathan Wilde: 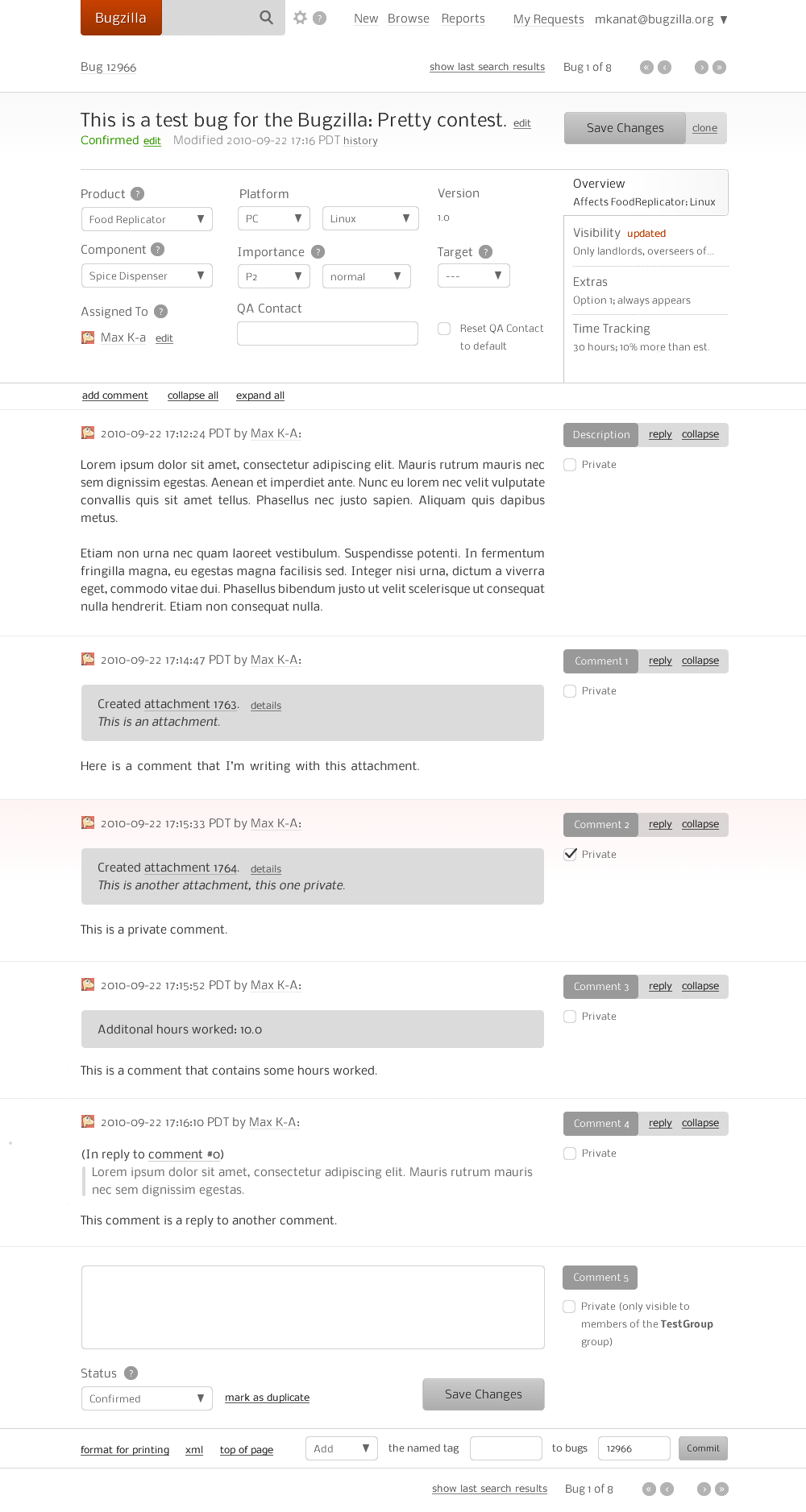 Jonathan’s ability to convert our UI into something beautiful and simple that even new users will find approachable is beyond anything that we had ever imagined could be done with Bugzilla. We are thrilled that Jonathan has won, and excited to implement his design as the official UI of Bugzilla 5.0.

We would like to thank everybody who entered. Your entries made this contest a fascinating and transformative experience for the Bugzilla Project. We were consistently amazed at the creativity, intelligence, and design sense that so many of you displayed, and wish you great fortune in the future of your careers.